The parts of a mill and what they do

The Function of a Vertical Milling Machine

The milling machine is the workhorse of the machine shop. In essence, a vertical mill is like a drill press except it is fitted with sturdy bearings capable of handling side as well as end loads. Normally up to 85% of machining jobs will require a mill rather than a lathe. Unlike a lathe that spins the material, a mill holds the material firmly while the part is moved across a spinning tool or the spinning tool is brought down into the part. The part is moved very accurately by means of a table that can be controlled in two directions (X-axis = left/right and Y-axis=in/out). The third axis is provided by a vertical spindle (Z-axis) that moves up and down. The mill can be used for milling slots, holes or pockets, drilling, profiling, boring and surfacing. Most milling is done using “end mills” that look much like a drill bit except they are capable of cutting on the sides as well as on the end. They are held in an end mill holder and can cut slots, pockets or flat surfaces. A drill chuck can be used for holding drill bits. For larger surfaces, a “fly cutter” is used. It is a single-pointed tool that spins in a large arc and is brought across the surface of the part to flatten it.

The Parts of a Mill and What They Do 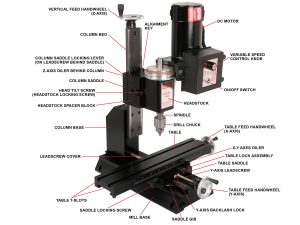 THIS SITE IS FOR TESTING PURPOSES ONLY. PLEASE GO TO SHERLINE.COM TO ORDER. ORDERS ON THIS SITE WILL NOT BE FULFILLED Dismiss