Identifying used Sherline tools by changes through the years

What to Look for when Buying Used Miniature Machine Tools

When buying used machine tools, your selection should be based on its intended use. Many collectors find the old Unimat machines to be a fun investment. Used tools from the ’60s and ’70s sometimes sell for several times their original cost, but you should keep in mind that if you intend to cut metal with your tools, the most important factor to look for is rigidity. The two-rod bed design of the original Unimat lathe was its weakest point. It was quite flexible, and the accuracy of the work that can be done on it was and is limited as a result. In its time, it was the first to bring machine tools into the size and price range of the home shop machinist. However, if you intend to machine accurate metal parts on the tool you buy, a used Sherline tool will do a better job for you. In addition, parts are still being manufactured for Sherline tools, factory service and support is available, and almost all new accessories will fit even the early machines made in the USA.

Well made small machine tools are generally regarded as treasured items. They are usually kept in good shape and either passed on to relatives or sold to other machinists when there is no longer a need for them. Below is a guide on the various changes that have taken place over the years on Sherline tools to help you put a date to either your machine or one you are thinking of buying or recommending to a friend. A quality machine tool—even one many years old—will still be able to do accurate work if it has been well taken care of. However, keep in mind that many improvements have been made over the years regarding motor power, features, and size. These all come into play when deciding on how much to pay for an older machine vs. buying a new machine.

Sherline machines have been sold under special label agreements with a number of companies over the years. When the Sherline name was relatively new, several large, well-established tool companies chose to sell Sherline tools under their own name to instill customer confidence in the quality. The tools are identical to the Sherline tools made at the same time except for the label. Some of them can still be found on the used market from time to time. Sherline machines have been labeled as Craftsman (Sears), Brookstone, Jensen, NATCAM (National Camera Co.), and Uni-Turn (Europe). Several CNC suppliers also market them under company names that include Denford, D&M, LabVolt, Paxton-Patterson, and Light Machines (Spectralight).

Virtually any Sherline machine, regardless of age, can be brought up to current specifications with existing parts now being manufactured by Sherline. So if it looks just like a Sherline, it probably is, and full support is still available. 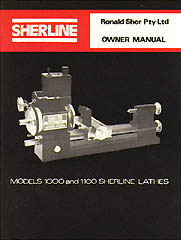 Prior to 1972—Sherline Model 1000/1100 lathe made in Australia by Ron Sher Pty. Ltd. Metallic blue finish, brass bed, and brass crosslide table, 180 watt motor with speed control mounted atop motor, 2-range pulley system. This machine was designed using unmachined extruded aluminum and brass sections to keep costs low while still making it more rigid than the Unimat it was designed to compete with. Some parts from today’s more modern Sherline lathes can be retrofitted to this original import, but Sherline cannot be responsible for full support of machines manufactured by the original Australian company.

The instruction manual from Australia shows the original Model 1000 lathe with a brass bed, 4″ brass crosslide, and small 180-watt motor. The finish was originally a metallic blue color. Click on the image to view a PDF file of the original manual. The last two pages include an exploded view and parts listing. 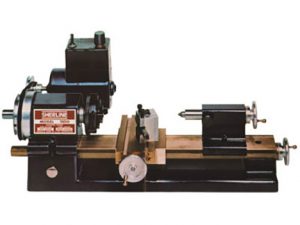 1972-73—Sherline Model 1000 lathe, Manufactured in Australia, imported to the USA. Black finish, brass bed, and crosslide table. (Only about 100 sold in initial purchase at trade shows under the Sherline name.)

Early imported lathe with brass bed and crosslide. Note speed control housing mounted directly to top of a small motor. The motor is located to the right of the pulley. 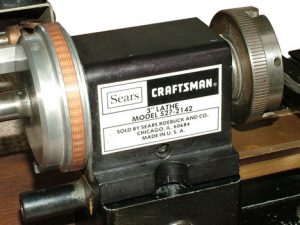 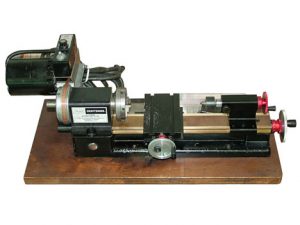 1974—Manufacturing begins in the USA. Black anodized finish on machined extruded aluminum parts, black painted cast base, brass bed, crosslide table changed from brass to aluminum extrusion, Lathe model designation changes from 1000/1100 to 4000/4100. Black Dayton 1/5 HP AC/DC motor with separate speed control. The larger motor was relocated to face the opposite direction so that it would be out of the way. Accuracy improved by about 200%.

Note that Sherline machines were also sold under several other brand names for years. Sears (Craftsman), Jensen, and Brookstone are the best known. These are actually Sherline tools and will still accommodate today’s accessories and most parts. See OTHER COMPANIES that sold Sherline tools for more details on these machines.

The top photo to the left is a Sherline lathe sold by Sears and labeled “Craftsman.” The lower photo shows the same machine has a combination of original and new components. In place of the old silver handwheels, this one has been updated with new adjustable zero handwheels. The old tailstock has also been replaced with a new one, and the drive belt has been replaced. Some machines you find in the used market may have some updated parts, making them harder to identify. 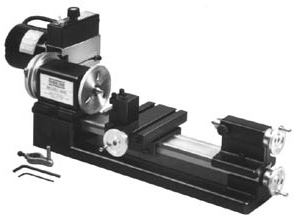 An early Model 4000 lathe still has the brass bed and silver handwheels with fixed aluminum handles. Note also the long, narrow speed control housing that accompanies the AC/DC motor. It is mounted separately from the motor on a metal belt guard. Note also there is no cutout in the base of the tailstock. 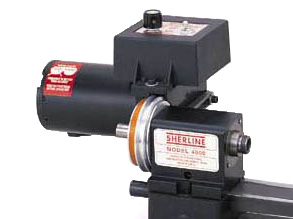 1993—Changed from AC/DC motors to DC motor with electronic speed control (identified by larger, square speed control box as opposed to older narrow speed control.) We feel the change to this motor was probably the biggest single improvement in the functionality of the machine. (NOTE: Older machines can be upgraded to this motor and speed control by adding P/N 33050. Also needed will be a new P/N 43230 two-speed range pulley. Call for prices.) 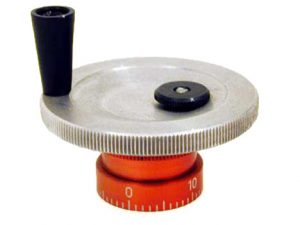 Late 1993/early 1994—Silver aluminum handwheels with rolled-in markings changed to red with laser engraved markings. Adjustable “zero” handwheels introduced as an option. These larger 2″ handwheels are silver with a red anodized collar and black locking screw. (These can be added to any existing machine as a retrofit.) Mill columns get larger 2.5″ handwheel and ball bearing thrust on the leadscrew.

Adjustable “zero” handwheels became an option in early 1994. A new laser engraver made it possible to engrave the markings rather than roll them in, so red anodizing is used for high visibility of the lines. 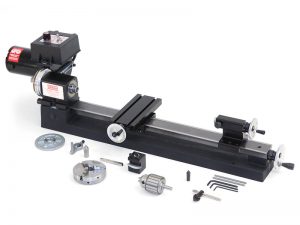 1994—Model 4400/4410 long bed lathe introduced with distance between centers increased from 8″ to 17″. Crosslide table length increased from 4″ to 6″ on 4400, soon thereafter on 4000 lathes as well. The base of the tailstock was cut out to allow the spindle to extend further out over the table. New CNC factory milling equipment improves the accuracy of machines even further with no significant increase in price.

The long bed lathe was introduced in 1994, more than doubling the length of parts that could be turned between centers on the lathe. The main reason for its introduction, however, was to provide more working space for larger chucks and longer drill bits while still being able to hold a relatively large part. Note also the new tailstock with cut out base for a longer extension over the table. 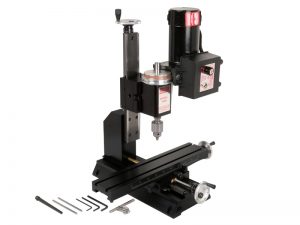 1997-1998—Mill Y-axis anti-backlash nut lock was changed from a pointer style lock to a star gear style lock. (The two systems are not interchangeable, because the newer system required that the mounting hole be drilled closer to the leadscrew.) 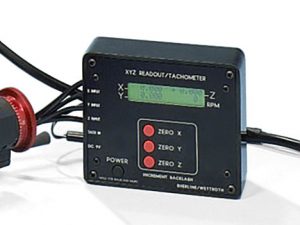 1998—Digital readout introduced as an option for all machines

1999—Model 2000 8-direction mill introduced. It features a design based on the movements of the old shop favorite…the Bridgeport® mill. In addition to X, Y and Z movement and headstock rotation as is found on the 5000 and 5400 models, the 2000 also offers ram in/out, ram side/side pivot, column in/out pivot and column side/side swing.

The Model 2000 mill features a 14″ long base and a ram/column design capable of moving the tool and part in eight different directions in relation to each other. 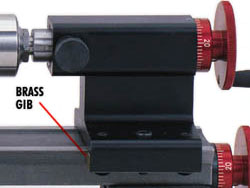 1999—Lathe tailstock with brass gib replaces the previous split style. New design eliminates the possibility of pulling the tailstock out alignment by tightening the locking screw when locking it in place on the bed.

The new tailstock gib design compensates for wear and also allows the tailstock to be locked in place without distortion. 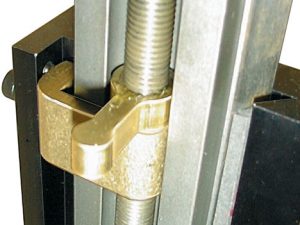 The new saddle lock design offers a quick and positive way to lock the Z-axis leadscrew on the mill without having to use any tools. (Not included on CNC-ready mills.) 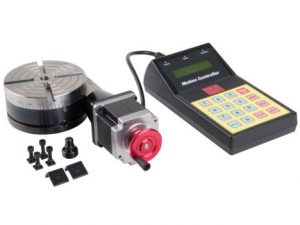 The P/N 8700 CNC rotary table brings individual axis computer control to tabletop machining. A linear version of the self-contained, programmable keypad unit is also available to drive any axis of a lathe or mill. The units can be “daisy-chained” together to produce coordinated movements in sequence. 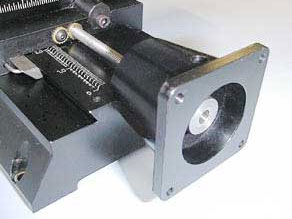 The addition of stepper motor mounts in place of handwheels makes a Sherline tool ready for the application of computer control. (Note: Star gear style lock introduced in 1997 can be seen here securing the Y-axis leadscrew anti-backlash nut.) 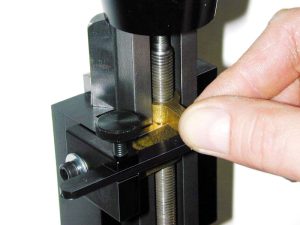 March 2004—On all CNC and CNC-ready mills, the Z-axis was fitted with an adjustable locking lever to reduce backlash. A similar fitting was developed for and installed on the leadscrew of all CNC and CNC-ready lathes as well. A retrofit kit for the mill was offered as P/N 4017Z/4017ZM and a lathe kit as P/N 4417Z/4417ZM. 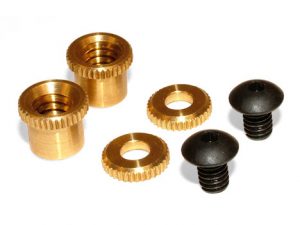 July 2004—Tooth sizes on the X- and Y-axis anti-backlash nut and star gear lock were reduced to provide a tighter fit and better control of backlash in those axes. A retrofit kit P/N 5011U /5111U was introduced to bring machines from 1997-2004 up to these improved standards. This upgrade will not work on the pre-1997 pointer lock system because the lock hole center was moved further from the leadscrew to accommodate the larger star gear lock.

The 5011U backlash lock upgrade for the mill X- and Y-axes. 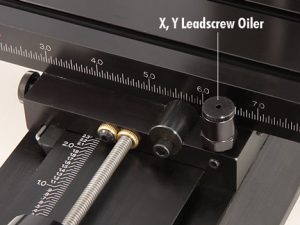 March 2010—An oil reservoir was added to CNC mill saddles. The increasing use of CNC on the mill has led to the introduction of an oil reservoir and passages in the mill saddle that feed lubricating oil to the leadscrews during operation. Designed originally as a manual machine, the potential wear caused by rapid, constant rotation of the leadscrew during CNC use have created a demand for a way to keep the leadscrew lubricated when the machine is unattended during a long operation. More details on the oiler can be seen HERE. This oiler is now standard on all CNC and CNC-ready Sherline mills. It can also be ordered as a $25 optional upgrade on new manual Sherline mills. (Due to the cost of a new saddle, it is not recommended as an upgrade for existing mills.)

The mill oiler keeps the X and Y leadscrews lubricated during extended CNC use. Unscrewing the cap allows the reservoir to be filled with light machine oil, feeding it to the leadscrews via gravity thorough passages drilled in the mill saddle.

THIS SITE IS FOR TESTING PURPOSES ONLY. PLEASE GO TO SHERLINE.COM TO ORDER. ORDERS ON THIS SITE WILL NOT BE FULFILLED Dismiss